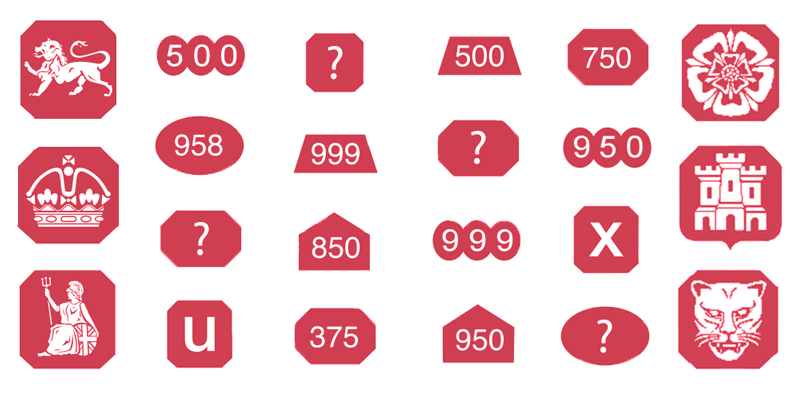 What is a Hallmark?

Precious metals i.e. gold, silver, palladium and platinum are rarely used in their purest form. They're mixed with other metals to form an alloy that has the desired colour and strength.

It's not possible to discover the precious metal content of these alloys just by looking at them. Because of this, each item of jewellery made of precious metals is tested and then hallmarked. A hallmark is an official mark that guarantees the purity of a metal.

It is illegal in the UK to sell or even describe an item without a hallmark as a precious metal. But there are some exceptions. A piece can be exempt from the hallmarking regulations if it weighs less than the following:

Hallmarks are made up of 3 compulsory marks. These are the Sponsor's Mark, Fineness Mark and Assay Office Mark.

This is the registered mark of the company or person that sends the item for hallmarking. Manufacturers, wholesalers, retailers, importers and more can all be sponsor’s. In the UK, this mark has at least 2 letters, and all marks are unique.

This mark shows the precious metal content in the item. It's recorded in parts per thousand. This means that the number tells you the percentage of precious metal content in the alloy. For example, the fineness mark of 9 carat gold is 375. This tells us that the alloy must have at least 375 parts gold per 1000. The shape surrounding the number indicates the metal type, which you can see in the diagram below. 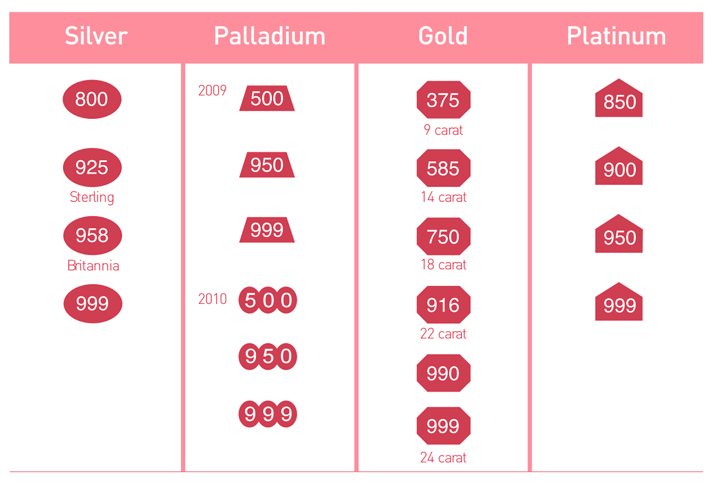 This mark shows which Assay Office in the UK tested and hallmarked the item. There are currently 4 offices which are in London, Edinburgh, Birmingham and Sheffield.

A few optional marks are sometimes added onto pieces at the Sponsor's request. These include:

This marks tells us the year that the item was hallmarked. It was mandatory until 1999, but can be voluntarily applied alongside the compulsory marks. The letter depicting the date changes every year on January 1st.

Only 25 letters of the alphabet are often utilised, as either i, j or l are not used. This is because some font styles could cause confusion between the letters. Once all letters have been used, the font is then changed.

These are a branding that depict the metal that is in the article. Again, this is no longer compulsory.

This is an international treaty that encourages the cross border trading of precious metals. The United Kingdom has been a signatory to this agreement since 1972. The convention hallmark shows the fineness of the metal. The only difference is that scales surround the number. See the hallmarks below.

Items bearing a convention mark from one of the member countries are legally recognised in the UK. Thus, they don't need to be re-hallmarked. This is the same for items assayed here, as all member countries will recognise these marks.

Thanks to the British Hallmarking Council for confirming use of the hallmark images in this article. Images sourced from the Hallmarking Guidance Notes.